Dedicated to Masahiro Kamiya, my dearest friend from Japan!

One can find many ways of experiencing a new country. To me, intimate sensing is crucial to the experience. Through smells I found a way to deepen the experiences of my travels and perpetuate them in my mind.

Smells played a more important part of my experience in Japan than in other countries I have already visited due to the fact that Japanese people are very reserved and formal when compared to other civilizations.

Just as a curiosity: The average interpersonal distance (personal space) in Japan is 360 cm, while in Europe is 240 and in Spanish speaking countries like Cuba is 120cm.

Although smells are invisible and they come and go in the most ephemeral way, they make a substantial contribution for our understanding of the world around us. If you are really aware of its representations, you can also translate them into the cultural background of its surroundings.

So, using the sense of smell played a significant part of my visit to the country of the rising sun.

Rice is the most important crop of Japan and it has been cultivated for more than 2000 years. Japanese white rice is not one of the pillars for the Japanese diet, but it is also so important and representative of their culture that once it was used as currency. Also, GOHAN, the word for cooked rice, became a synonym for meal (in a general way). 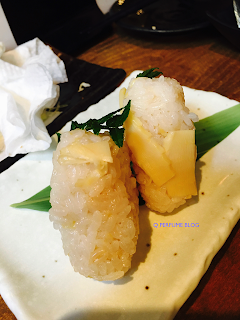 
A bowl of steamed cooked rice is served in every Japanese home, restaurant or any other place serving food, but this is not the only way Japanese enjoy rice. The grain can be processed into different products such as Sake (rice wine), rice vinegar, rice flour or bran (nuka), and enjoyed in rice cakes (mochi), onigiris (equivalent to rice balls or "sandwiches"), domburis, sushis and many other Japanese dishes, including desserts and sweets. 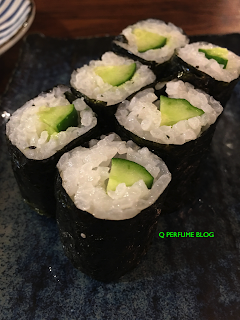 White Japanese rice is short, sticky and softer in texture and once cooked they aquire a translucency and glossiness quality that no other rice does. Its appearence is so important to Japanese culinary that in fact a sushi master has to know his rice more than anything else -  how to purchase, prepare and store it. Some even grow their own crops.

Flavor (taste and aroma) in the grain is the highest valued grain quality traits in rice. It is the key factor in determining its market price, although Japanese prefer less scented grains. For them appearance, texture, color and degree of gelatinization with cooking is much more important than fragrance.

A Japanese white rice contains 200 volatile compounds therefore, as simple as a bowl of Japanese cooked rice looks to you, it is in fact a very complex mixture of odorous compounds that needs a very complex sensory evaluation to determine its aroma.

Rice aroma has been already described as starch-y, nutty, slightly flowery, popcorn-y, baked-bread scented, hay-like scented...Truth is that the aroma of rice is mainly cause by the presence of the 2-acetyl-1-pyrroline. 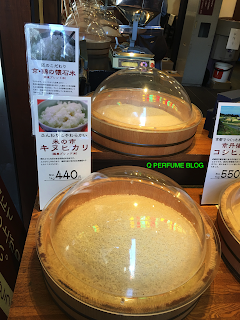 
As I mentioned before, you will find rice steamers in use absolutely EVERYWHERE in Japan. When that lid opens and the cloud of fragrant humid vapor is released and spread in the air you will know you are in Japan. There is nothing more delicate, more comforting and more peaceful than this aroma. A bowl of fresh cooked steamed rice in front of you is a deep plunge into the millenar traditional culture of Japan.

The aroma of steamed cooked rice is definitely the trademark of Japanese olfactory culture.

Tatami mats are a traditional flooring unique to Japan. They are made of several rice straw core (doko) that are covered with compressed rush grass straws (Igusa - juncus effusus); filled with wood (fuchi) and laced with decorative cloths. Straws are woven and cloth is used to cover the woven ends. They are green when new, maturing to a yellow tone with age. 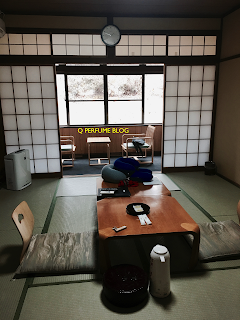 The 4000 to 7000 rushes in the tatami mats  is what brings to it an unique pleasent, refreshing and relaxing smell. Specially when it is brand new it releases a herbal, greeny, grass-y, slightly sweet smell that is very unique to Japan.

To sleep in a futon on a tatami floor is the ultimate Japanese experience! I never slept better in my entire life!

Tatami rooms smell of tradition, royalty, austerity and most of all, of peace.

Just as a bowl of rice, you will have the impression that tatami mats are simple. Well, not really. They are in fact a luxury that once was enjoyed only by royalty. In addition, tatamis are not cheap at all and its constrution and placement is really not a simple task. Like everything in Japan, it is a process following many rules, tradition and rituals. 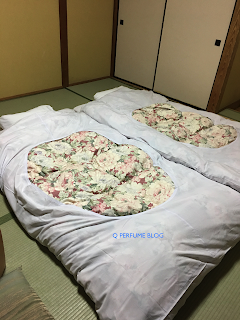 Although they are in decline in Japan (many homes are now using other types of flooring), as a tourist visiting many traditional houses, temples and tea rooms you will certainly agree with me that the tatami smell can be considered a national olfactive identity of the Japanese smellscape.

I know you must be confused right now. Probably asking yourself "shouldn't she be mentioning green tea instead of coffee?" To answer to to this question I must say that first of all,  +Q Perfume Blog is not famous and followed worldwide for bringing the obvious. Second, I will mention green tea at some point of course, but my main concern when mapping a city or country is to understand the complexity of its olfactive identity. When I mentioned the globalization of smells as a disturbing factor of the original smellscape of a country I could not leave Japan out of the picture. Indeed the aroma of coffee is present in Japan today corrupting its traditional scent-based spacial experience.
Brewed coffee aroma became an everyday smell detected EVERYWHERE in Japan. It is altering the sensory perception of the country by replicating the culture of others.

But is this really a new habit among the Japanese? 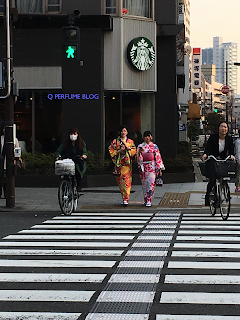 
I found some interesting data regarding the culture of coffee in Japan, published by the Japanese Coffee Association.

A limited amount of coffee was drunk by Dutch residents of Nagasaki at the end of the eighteenth century. However, coffee was not generally sold until the last quarter of the nineteenth century with the first bulk imports in 1877.
The first coffee shop was opened in Tokyo in 1888 and the coffee drinking habit spread slowly with imports peaking at 140,000 bags in 1937.
Global conflict of the World War Ⅱ prevented significant imports of coffee during 1940s and the requirements of post-war reconstruction dampened consumption during 1950s.
Coffee imports were liberalized in 1961 and some 250,000 bags were imported in this year. Coffee remained a minor drink compared with the traditional green tea and initially it was drunk only among richer adult urban dwellers.
Consumption of soluble coffee widely spread and regular coffee was consumed at coffee shops, eventually coffee has become increasingly popular over all the country.
The introduction of canned ready-to-drink coffee in both hot and cold forms in 1969 and the expansion of vending machines helped to promote coffee consumption among younger generations and consequently coffee consumption increased rapidly by the synergistic effect.
Japanese coffee consumption has soared during last 40 years. The country is now third in terms of total consumption among importing countries. The rapid increase of consumption was realized mainly due to following reasons:

*A marked change in society with some “Westernization” of consumption habits;
* A marketing, with the initial emphasis on soluble coffee then extended to roasted and ground coffee;
* The initial growth of attractive coffee shops (The number of coffee shops reached to 162,000 outlets peaking in 1982);
*A process of product innovation including the vigorous promotion and sales of canned ready-to-drink coffee (now more than 5 million vending machines exist all over Japan and half of which serve for sales of beverages, including coffee). 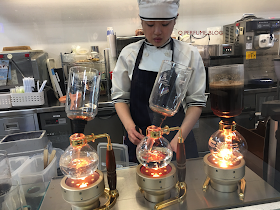 It is easy to understand why coffee has a significant presence in Japan. Knowing a little bit of chemistry of human vices I tell you: caffeine and nicotine walk hand in hand just as Romeo and Juliet. They simply LOVE each other! Japanese are heavy smokers, therefore they are also heavy coffee drinkers.

Another factor is the pressure to perform. Japanese have crazy working habits. They need this boost of energy not to crash. Which at one point they do and kill themselves by jumping into holes in the forest. Google it...It is creepy shit.

Anyways, back to scents...

You will smell coffee in the air all day long coming from coffee vending machines - where you will find canned or bottled hot/cold coffee; from coffee shops like Starbucks or Japanese brands; from coffee shops selling beans or imported grinded coffee and many coffee tasting at the streets and shopping malls. 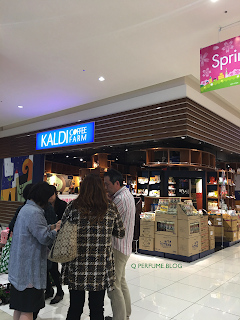 I brought a video of an exquisite type of coffee vending machine that shows customers how the coffee is brewed:

Although coffee is not an original Japanese treat, you will find the Japanese touch in every experience they offer, so your coffee experience would not be different! It is nothing like elsewhere. 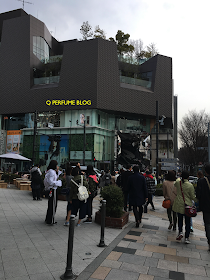 We found a very exquisite café in Harajuku: The Cat Cafe Mocha which is a café for cat lovers. You must know that Japanese are so crazy about cats that they even sell the scent of cat head. 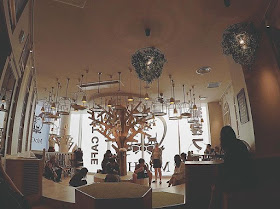 So, loving coffee and cats you won't be surprised that Mocha is a place where you get to sit to sip a cup of coffee surrounded by many many cats! We tried to get in to experience this feline coffee experience, but unfortunatly the line was so long that we had to give it up due to our tight schedule for that day.
Mocha offers cat feeding time when not only you sip your coffee but you can also feed the little balls of fur. Only in Japan, believe me!