Smellscapes of Japan - Part ONE

In 2014 I published an essay of articles on urban smells dedicated to Victoria Hensaw - the Queen of Smellscapes (or olfactive maps).That article evolved one entire theory that we are loosing the sense of the smell of our "home" due to globalization. Once you have the same shops, the same bakeries, the same chain of brands everywhere, you have also a globalization of smells, which are little by little substituting and sometimes even erasing the local ones:

"In a world of globalization and virtual living we have developed a lack of emotional connection to what is local. We are less aware of our surroundings and we are not fully experiencing the "materiality" of things. Being less contemplative and less emotionally connected to a local environment although it may sound very modern and hip, it is also drifting us away from our origins. We are loosing our identities as urban citizens. Where we come from and who we are. We no longer recognize the smell of "home" because we became urban nomads, modern gypsies."

Really concerned about the lost of our scent heritage I did a journey in my own town São Paulo to try to collect some local smell identity.Truth is that I have been collecting smells from every city I visit. Some I have shared here in my blog over the years.

Victoria Hensaw's life work played a crucial role in my smell walks and made me fully understand how important it is to identify and map these smells and also improve my knowledge of how to map and how to catalogue smells. Unfortunately she has passed away in 2004. When I found out about her she was already sick, so I never got to do her smell walks that I dreamed so much of joining one day. But the inspiration did not die with her and I continue to do my olfactive journeys...

Jumping to the present... 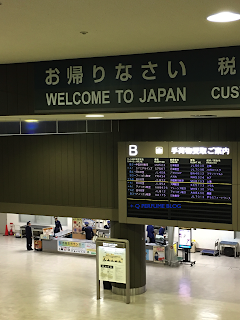 I just came back from a trip to Japan and inspired by something that I also wrote in that article of 2014 about this country made me wish to write a piece on Japan:

"...Japan is an exception in a way. Although eager to have food chains like any other country according to the specialist, it is the country that has one of the most advanced attitudes towards the olfactory sense and its relationship to place, going as far as declaring “One Hundred Sites of Good Fragrance” across the country. From the sea mist of Kushiro to the Nanbu rice cracker of Morioka, not to mention the distinct smell of glue that hangs in the air around the doll craftsmen’s homes in Koriyama, all now have protected status..."

Curious about the concept of the 100 Sites of Good Fragrance?

It is a project developed by the Ministry of Environment of Japan, and in their own words:

The Ministry of the Environment has introduced the olfactory measurement method to the odor control law to further solve the problem of odor caused by urban / life type pollution which is increasing in recent years, and is promoting the spread of it more In addition to that, we adopted a new way of thinking about the Kaori environment, "We will rediscover the good fragrance around us, conscious of the various smells around us through noticing Kaori, actively work on improving unpleasant smell Regional activities "that we would like to promote. Therefore, as part of supporting regional efforts to preserve and create good scent and its natural environment and culture - the Kaori environment - 100 points that are particularly excellent as a Kaori environment "100 Kaori Landscapes" We decided to implement the project. Regarding the candidate for 100 candidate sites, there were 600 entries from all over the country during the three months from May 25 th this year to the end of August, as candidates for "100 Kaori Landscapes." By entrant, there were 512 local governments and 88 individuals.(extracted from the Ministry's website)

I must admit that did not visit the 100 sites of Good Fragrance therefore I can't really write about them, but instead, I decided to share my own collected smell perceptions of Japan during this last Spring.

I know you can't wait for this journey to start, but before we step in this fragrant path there are some facts about Japan related to fragrance that I think it is worth mentioning here.

To those of you who followed me in Japan in Facebook you know I mentioned the fact that Japanese culture in general is contraditory and ambivalent. 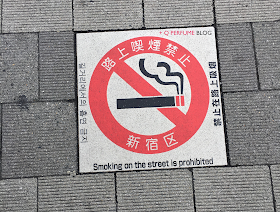 As an example, you will find non smoking signs on the streets. They have specific hidden corners where groups of smokers gather to share their vice, and yet people are allowed to smoke in restaurants while eating. SO, public open free space is not a place to produce smoke and bad smells, but blowing it on people's face while they eating it is not only allowed but almost a must. Actually they will find quite surprising that you don't mix Malboros with sushi. 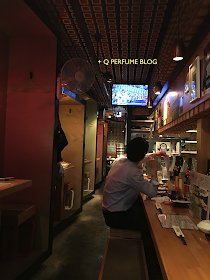 The contradition and ambivalence are also applied to the perfume culture of Japan.

1. You will see 1000s of shops selling perfumes, but you will rarely find Japanese wearing them.

2. Japanese don't wear perfume but in Japan you find a perfume sommaliers.

“It is my job to select a scent that matches the customer. It is also my duty to teach the customer how to wear and preserve perfume, and how to observe proper manners when wearing it. He adds: "It is not just about knowing as many perfumes as possible, though that is necessary as well. You need to know the historical background of fragrance, how to describe each scent, how to display the perfume on the counter, and even the anatomy of the nose and how it works.” (Kato has been selling Bluebell’s perfume imports at the Isetan department store in Tokyo’s Shinjuku district since 2001).

In 2003 Bluebell Japan introduced a perfume sommelier degree, a certificate awarded to Bluebell employees who meet certain qualifications. One of them being to pass the fragrance sales test conducted by the Japan Fragrance Association, and in order to pass this test it is necessary to have a wide knowledge of the perfume industry and of fragrance in general.

Yes fragrant friends, they have experts in fragrance, but will Japanese people wear the fragrances they are advising to purchase? Not really. 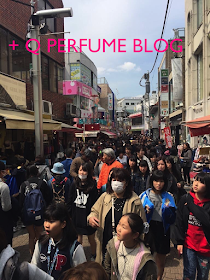 Regarding this subject I have always heard things like "you smell of what you eat". If that was 100% accurate Japanese people would smell like fish, soy, ginger... wouldn't they? Well, they don't.

Japanese people in the subway smell good after one long day of working. They don't have a pronounced body odor, nor does the subway stink. Ridding the subway you will notice the difference from a New York subway train right away!

Although Gwen Stefani has launched in 2005 a line of fragrances called Harajuku Lover, inspired by the Harajuku street fashionistas you can be in a crowd in the middle of the day in the fashion district of Harajuku, where you can't barely move, and all you will smell is delicate flowery shampoos, fresh washed clothes and crêpes (we will address to this aroma later on).

Experts explain that one reason why the Japanese fragrance market is still relatively small is simply due to what is claimed to be a racial characteristic of Japanese people: They have a lower tendency to develop body odor.

“In Western countries, people originally used perfume to conceal their body odor,” says Akiko Ryu, the deputy general manager of the perfume and cosmetics division of Bluebell Japan. “Most Japanese people, however, hardly have any body odor. Therefore, perfume is not a necessity.”

That explains why Japanese subways and crowds are not smelly. (they don't bring food and beverages to the subway like new Yorkers do...)

I confess that while traveling in the subway I wanted to come closer to the Japanese standing next to me and take better sniff, but since they have a cultural imposition of minding your own space - "don't touch me, don't even look at me if possible" rule, I did not dare to do so.

If you guys want to go deeper on this subject I found an interesting/fun video in youtube made by Rachel from the Rachel & June channel that actually explains in a fun and easy to understand the chemistry and genetics of Japanese people:

So by now you are wondering... How come there are successful fragrances like L'Eau d'Issey by Issey Miyake, Flower by Kenzo or houses like Shiseido and Hanae Mori if Japanese don't wear fragrances? It is indeed a mystery to me. There are Japanese perfume brands, there are perfume shops in Japan...but I am yet to find a Japanese person wearing perfume. Maybe perfume wearers gather in hidden corners to share their passion like the smokers do.

I read an article in a blog about living in Japan as a foreigner that Japanese people consider perfume an accessory only for very important people or for women that "work at night", but I had no confirmation on the matter.

4. You notice in Japan the absence of perfume in the air (personal scent), but the fragrances of household cleaning products, hygiene and laundry products are definitely there, almost like an entity.

Truth is while in Japan you notice that they have a near obsession to cleaning and hygiene. This cultural emphasis on cleanliness is thought to be originated from the influence Japanese religion Shinto. By the way, 80% of the Japanese population is devoted to Shinto religion which is translated to the Traditional Religion of Japan with 81,000 temples. Shinto suggests that there are more than 8 million deities (Kami or Shin) in the daily objects and as they hate impurities the followers of the religion and the world around them must be purified and cleaned constantly thought ritual of purification (Harai) with water baths. 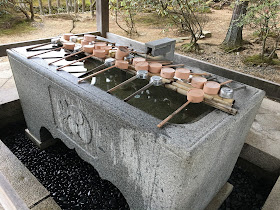 According to one of the laws of Buddhism, another popular religion of Japan, it is forbidden to wear ornaments and perfumes. So one can assume that Japanese use very little or no fragrances at all due to some sort of religious belief.

And to finish this chapter:

1. The Japanese make conscious use of smell in their everyday lives.
2. Japanese have been concerned to get rid of smell, rather than add it in the way that Westerners do… There was a period earlier when Japanese added things to stop smells – as in lavatories, for example – but nowadays the idea is to produce things that do not smell in the first place.
3. Compact living styles in close quarters encourage either milder forms of smell.