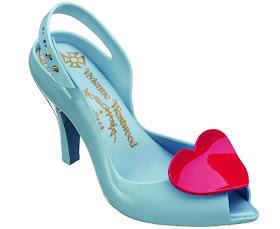 Melissa by Vivienne Westwood
The Brazilian brand Melissa shoes are scented, funky, fashionable and most of all, ecoconscious (the factory recycles 99.9 percent of waste and water used in production) & socially responsible (paying employees above-average wages and benefits).
For those of you who was not properly introduced to these magnificent trendy shoes I will give some details here:
It is produced by Grandene - one of the largest and most advanced (technologically speaking) injected footwear manufacturers of the world and 100% Brazilian.
Grandene is the largest shoe company in Brazil, and also the largest sandals manufacture of the world, exporting today to 85 different countries.
Melissa shoes were created in 1979 and till today it never stopped recreating itself. Using full plastic, fashion icons and behavioral references, Melissa has created a vanguard concept in the footwear market.
Designed by famous fashion designers and icons of culture such as Vivienne Westwood, Karim Rashid, Zaha Hadid, Isabela Capeto, Campana bothers, Alexandre Herchcovitch, J. Maskrey, Gaultier, Thierry Mugler and many many others...these shoes have amazing colors and shapes.

My last purchased item for my collection was a lavender Vinyl. 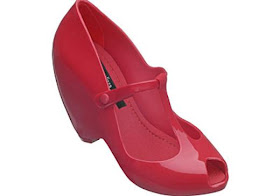 Melissa Vinyl - red
Esther Mahlangu is a South African designer who customized Melissa Ultragirl for this week international event - The São Paulo Fashion Week.
It is a limited edition that will be offered to guests, as a gift, only inside Melissa lounge, during fashion shows breaks. 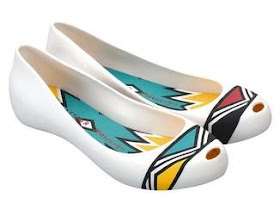